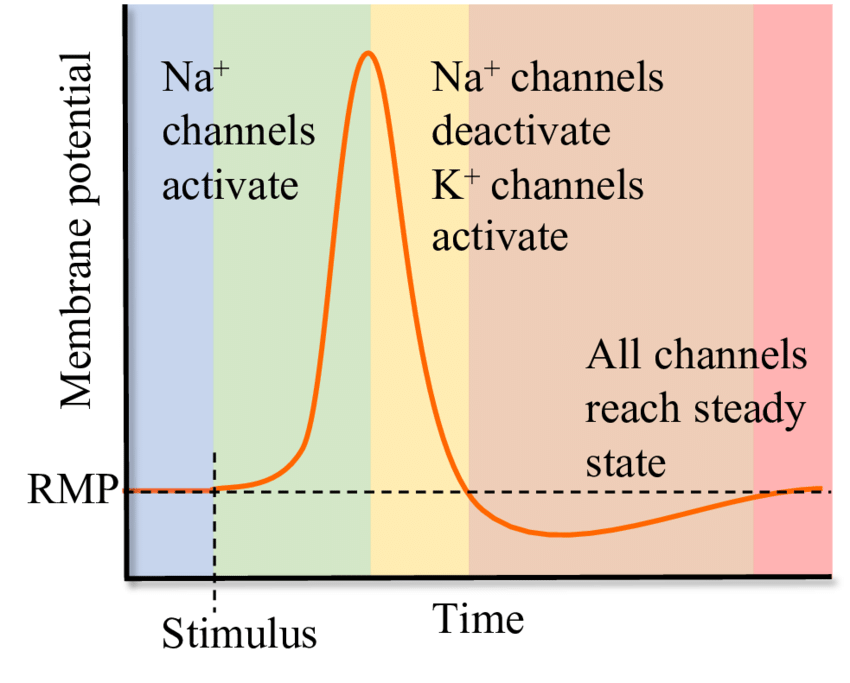 For a long time, the process of communication between nerves and their target tissues was largely unknown to physiologists. With the development of electrophysiology and the discovery of the electrical activity of neurons, it was discovered that signal transmission from neurons to their target tissues is mediated by action potentials. An action potential is defined as a sudden, rapid, transient, and propagating change in the resting membrane potential. Only neurons and muscle cells are capable of generating an action potential; that property is called excitability.

Action potentials are nerve signals. Neurons generate and conduct these signals throughout their processes to transmit them to target tissues. Upon stimulation, they will be stimulated, inhibited, or modulated in some way.

From the point of view of ions, an action potential is caused by temporary changes in the permeability of the membrane for diffusible ions. These changes cause the ion channels to open and the ions to decrease their concentration gradients. The value of the threshold potential depends on the permeability of the membrane, the intracellular and extracellular concentration of ions, and the properties of the cell membrane.

Hyperpolarization is the initial increase in membrane potential to the value of the threshold potential. The threshold potential opens voltage-gated sodium channels and causes a large influx of sodium ions. This phase is called depolarization. During depolarization, the interior of the cell becomes increasingly electropositive, until the potential approaches the electrochemical equilibrium for sodium of +61 mV. This phase of extreme positivity is the overdrive phase. 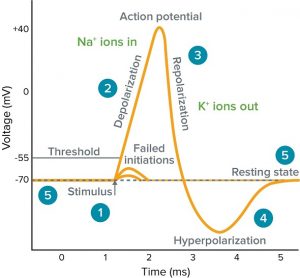 The refractory period is the time after an action potential is generated, during which the excitable cell cannot produce another action potential. There are two subphases of this period, absolute and relative refractoriness.

2. Relative refractoriness is the period in which the generation of a new action potential is possible, but only in response to a suprathreshold stimulus. This period overlaps the final 1/3 of repolarization.

Propagation of the action potential.

An action potential is generated in the body of the neuron and propagates down its axon. Propagation does not diminish or affect the quality of the action potential in any way, so the target tissue receives the same impulse no matter how far away it is from the cell body.

We need to emphasize that the action potential always propagates forward, never backward. This is due to the refractoriness of the parts of the membrane that were already depolarized, so the only possible direction of propagation is forward. Because of this, an action potential always propagates from the cell body, down the axon to the target tissue.

Each synapse consists of:

Numerous vesicles containing neurotransmitters are produced and stored within the terminal button of the nerve fibre. When the presynaptic membrane is depolarized by an action potential, voltage-gated calcium channels open. This leads to an influx of calcium, which changes the state of certain membrane proteins in the presynaptic membrane and results in the exocytosis of the neurotransmitter in the synaptic cleft.